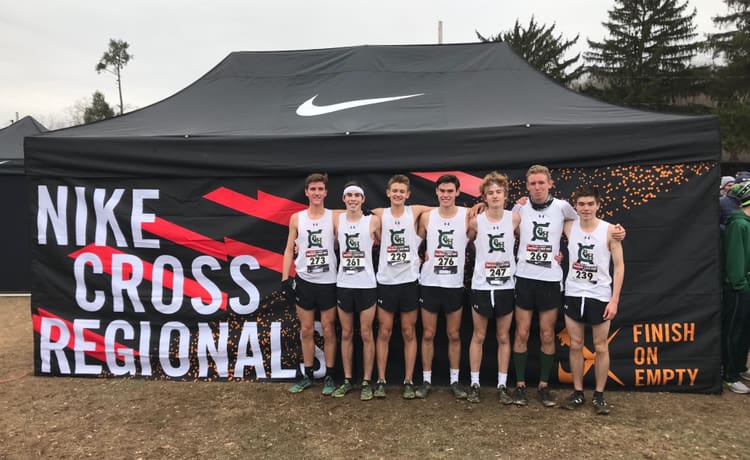 WARWICK, RI (November 27, 2018) – Bishop Hendricken’s dominant Cross Country team has punched its ticket to their first national competition since 2009, the Nike Cross Nationals (NXN) in Oregon. Tomorrow, Hendricken will host a send-off for the team as they board their bus and depart for the airport at 10:15am. Hendricken’s drum line, faculty, and students will attend in support of the team’s history-making season, and Principal Mark DeCiccio ’03 will recognize both the team and coaches on this impressive achievement.

The Bishop Hendricken Cross Country team is ranked #4 in the nation, per MileSplit. The twenty-four-time state titleholders and reigning RI state champions, went undefeated in their 2018 regular season with a 10-0 record.  Their accolades also include impressive first place finishes at this year’s Manchester Invitational at Derryfield Park in Manchester, NH, and the Eastern States Championship in Van Cortlandt Park, NY.

The Hawks, along with individual and club qualifiers from eight regional championships across the U.S., now head to Oregon where they will compete on December 1, 2018 to be crowned national champion, at the 15th annual NXN.

Fields of twenty-two 7-person clubs and an additional 50 individuals (male and female) will compete for the sport’s biggest prize, the coveted Winged Goddess of Victory statue.

The Nationals course at Glendoveer Golf Course offers athletes a premium, challenging championship venue with viewing options for spectators.  The Boys’ Championship Race begins at 11:35 am PT.  For those not able to make the event in person, a live webcast feed of the event will run on nikecrossnationals.com.