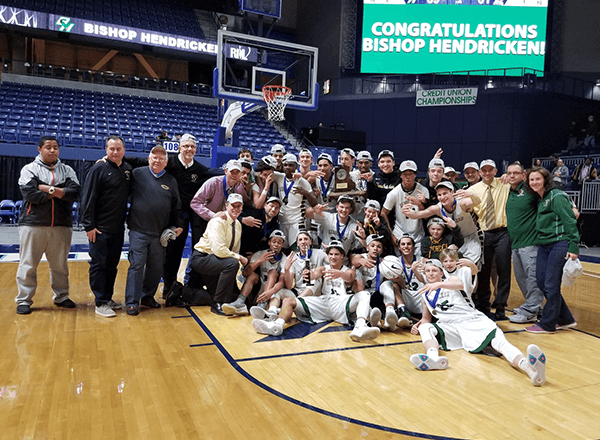 The Hawks down Mt. Pleasant in a thriller at the Ryan Center 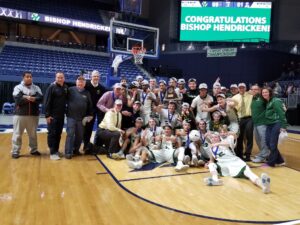 KINGSTON, RI – Bishop Hendricken proudly captured its 3rd consecutive RI state basketball championship, the program’s 17th, with a thrilling come-from-behind victory over the Mt. Pleasant Kilties, 69-61, on Sunday night at the Ryan Center (University of Rhode Island). Highlighted by stellar performances from Angel Sanchez, Tyrone “TJ” Weeks, and company, the Hawks reversed an 11-point deficit at the half to rally strongly and definitively in the second, outscoring the Kilties 47-28.

From tip-off, the Hawks and Kilties traded baskets early and often. But, Mt. Pleasant would seemingly begin run away with the game, widening its lead to an 11-point margin for the better half of the first frame. In an attempt to keep up, the Hawks added tallies of their own, but would have to settle for a 33-22 score in favor of the Kilties at halftime.

But, Coach Jamal Gomes’ squad would come alive in a big way.

Invigorated by a raucous Green and Gold crowd on hand at the Ryan Center, Hendricken quickly rallied to cut into the Mt. Pleasant lead. Driven by nearly air-tight defense, the Hawks held the Kilties to an early second half scoring drought, allowing themselves to come within a point. Despite a strong Kilties’ response, Hendricken would continue to turn defense into offense, causing turnovers and scooping up rebounds to force transition.

Bolstered by key buckets from Angel Sanchez, TJ Weeks, and Bobby Fiorito, the Hawks evened the score, then ran away with the game. Hendricken held Mt. Pleasant to another scoring drought in the latter part of the second half, then added insurance of its own to seal the state crown, 69-61.

Angel Sanchez sank several 3-pointers that fired up Hawks fans and rallied the team in the second half. Sanchez tallied 17 points on the night and was named Player of the Game. TJ Weeks, an offensive and defensive stalwart all season for the Hawks, led Hendricken’s charge with 20 points of his own. Bobby Fiorito and Andre De Los Santos notched their own double-digit tallies, scoring 12 and 10 points respectively.

The 2018 championship is third consecutive for Hendricken, and the 11th under Coach Gomes’ tenure. Previously, Gomes led the Hawks to seven consecutive state championships from 2004-2010, as well as a win in 2014.