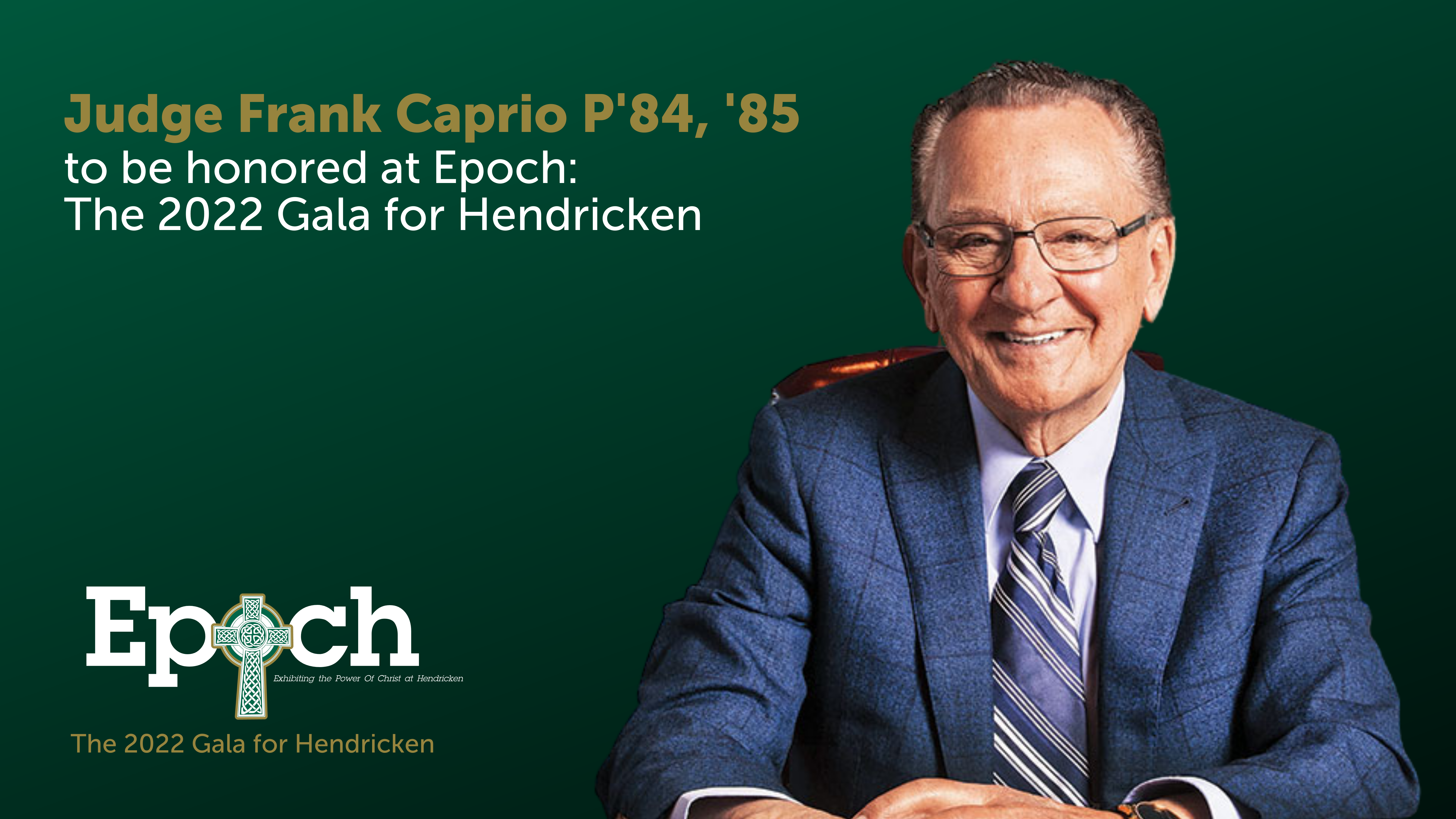 WARWICK, RI (April 20, 2022) – Fr. Robert L. Marciano, KHS ’75, President, is proud to announce that Bishop Hendricken High School will honor Judge Frank Caprio P’84, ’85 for his years of dedicated public service to Rhode Island at Epoch: The 2022 Gala for Hendricken on Saturday, April 30, 2022. The evening will begin at 6pm. Honors presentation will take place at 8pm.

During the gala, Fr. Marciano will confer an honorary diploma on Judge Caprio, making him a Bishop Hendricken alumnus, joining his sons, Frank T. Caprio ’84 and David A. Caprio ’85. Additionally, Fr. Marciano will present Judge Caprio with the inaugural Bishop Hendricken Distinguished Public Service Award which will be presented each year to a Rhode Islander in public service.

“Judge Frank Caprio’s service to Rhode Island perfectly demonstrates the Hendricken ideal: to make circumstances better for those around you,” said Fr. Marciano. “Judge Caprio’s compassion, love, and kindness for others via his public service and involvement in education makes him a role model for our young men and our community.”

Judge Frank Caprio has served as a Providence Municipal Court Judge since 1985. His court is known worldwide due to the top-rated, nationally syndicated television show, “Caught in Providence,” which was nominated for a Daytime Emmy in 2021. Often referred to as “the nicest judge in the world,” Judge Caprio has captured hearts around the world with his compassionate and deeply human interactions inside and outside of the courtroom.

A servant of education, Judge Caprio served ten years as chairman of the Rhode Island Board of Governors for Higher Education. At Suffolk University School of Law, he founded the Antonio “Tup” Caprio Scholarship Fund which is named after his father and awarded to Rhode Island students who are committed to improving access to legal services in underserved neighborhoods. Judge Caprio has also established scholarships in honor of his dad at Providence College and Central High School. He also received the Providence Opera’s Enrico Caruso Award for his major contributions to the arts.

“It is clear that Rhode Island, and more specifically, education in our state is better for having Judge Caprio’s leadership and advocacy,” said Fr. Marciano. “We are proud to be able to honor him as an alumni parent, and now, an alumnus of one of Rhode Island’s most storied schools.”

Judge Frank Caprio and his family will be in attendance to accept his honors and deliver remarks to attendees. Tickets for Epoch: The 2022 Gala for Hendricken are on sale now at hendricken.com/epoch. All proceeds from the gala benefit tuition assistance for boys who wish to attend Bishop Hendricken, but need help to make it a reality.