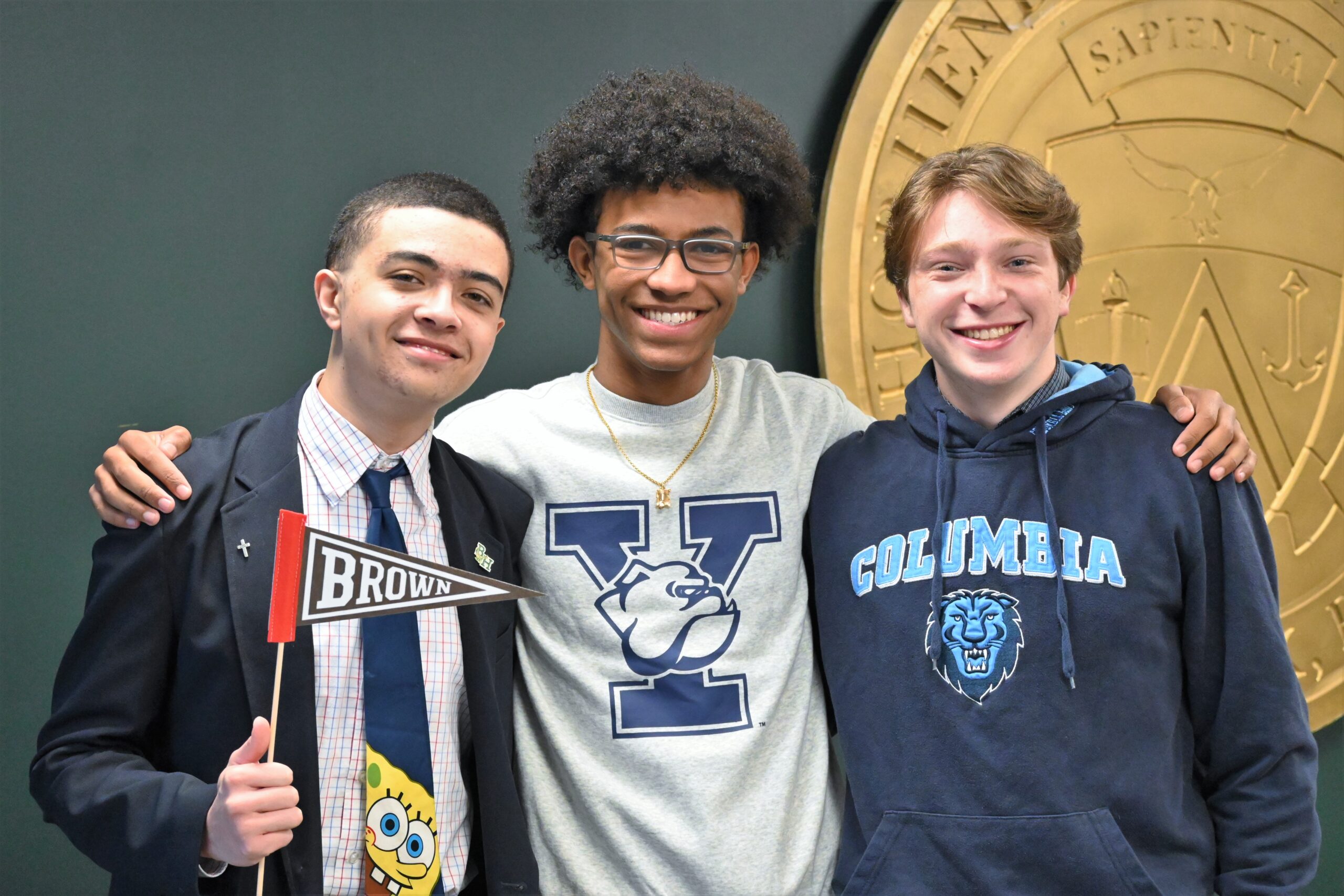 WARWICK, RI (December 20, 2022) – Ahead of Christmas Break, Bishop Hendricken is proud to share that three seniors have earned early acceptances to three different Ivy League colleges. Hunter Robbins ’23, Maison Teixeira ’23, and Richard Vigliotti ’23 were notified within the past few weeks of their acceptances to Yale University, Brown University, and Columbia University respectively. These three acceptances are included in one of the most rigorous and competitive early applicant pools across the country.

“It has been an absolute pleasure and honor to work with these three young men,” said Nicole Poloski, Director of School Counseling. “I am beyond proud of their growth and maturity over the past four years. While all three have unique talents and interests, what they have in common is their pride, intelligence, determination, grace, compassion, and gratitude. We are so excited to see what their futures hold!”

“This is what we mean when we say ‘know no limits,'” said Mark DeCiccio, Principal. “To say we are immensely proud of these three young men is a dramatic understatement. Through their hard work and experience here at Bishop Hendricken, they’ve earned this incredible accomplishment.”

Robbins was admitted to Yale through the Restricted Early Action program as part of the lowest early acceptance rate in 20 years, according to the Yale Daily News. He’s currently ranked third in the Class of 2023 with a perfect 4.0 GPA. More importantly, Robbins leads with a genuine desire to ensure that everyone is seen and heard which inspired his involvement in Born to Stand Out, Bishop Hendricken’s affinity group for young men of color, and Hawks for Her, a group intended to celebrate the women of Hendricken’s school community. Robbins is also a talented trumpet player, member of the Arts Academy’s Band concentration, Academic Decathlon, and President of the Youth Force Leadership Club. In 2021, Robbins won the Write Rhode Island Short Story Competition for his story, “The Boy and the Hidden Truth.”

Teixeira was accepted to Brown through the QuestBridge Scholars Program, earning a full four-year scholarship to the university. Currently ranked 15th in the senior class, Teixeira thrives in all areas of the arts, put specializes as a writer, animator, designer, and visual artist. He has excelled as a member of the Arts Academy’s Visual Art concentration. Yet, his work outside of the classroom is arguably more impressive. In addition to having several of his stories published, Teixeira won the Write Rhode Island Short Story Competition in 2019. In 2016, he animated a short bumper for PBS Rhode Island that aired across the network in the same year. He is currently writing and illustrating a children’s storybook about pedestrian safety for the Rhode Island Department of Transportation with Young Voices, a non-profit that gives young people a seat at the table on policy making.

Vigliotti was admitted to Columbia through the Early Decision program. He’s currently ranked 5th in the Class of 2023. An overall tremendous student, his love and passion for the Spanish language set him apart in the classroom. Vigliotti earned a gold placement on the National Spanish Exam in 8th, 9th, and 10th grade. For his Culture Fair project in 11th grade, he taught himself how to crochet for the purposes of crocheting an entire cardigan sweater, earning him first place. A talented musician, Vigliotti plays the saxophone, flute, and piccolo. He is a member of Academic Decathlon, Book Club, Creative Writing Club, Mitre Yearbook, Hawks for Her, and has competed on the Math Team and in Science Olympiad.

Bishop Hendricken has applications pending for all eight Ivy League schools this year, according to the School Counseling Office. Twenty-four students in the Class of 2023 have started at least one Ivy League application, and more acceptances are anticipated at the Regular Decision release date.