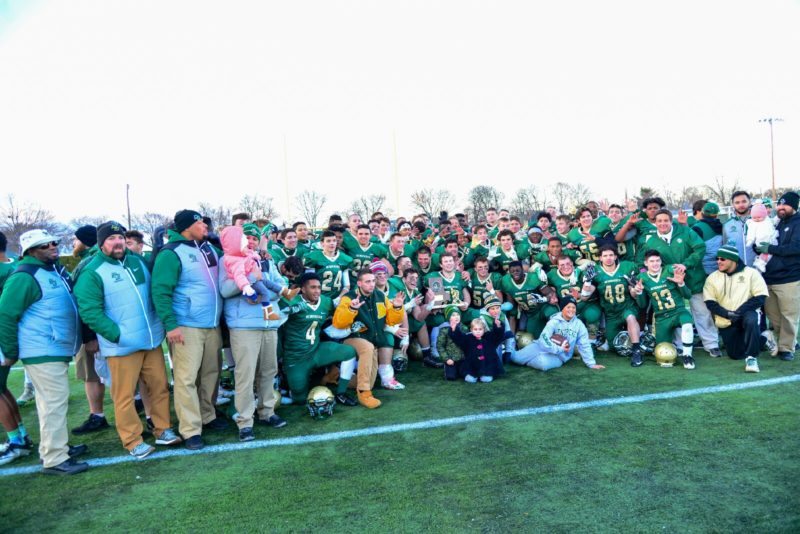 Congratulations to the Hendricken varsity football team as the Hawks made history by winning their seventh consecutive state title on Saturday afternoon at Cranston Stadium.

Hendricken dominated La Salle, 48-28, on both sides of the ball.

Senior running back/defensive end Kwity Paye ’17 earned Super Bowl MVP honors as he scored four touchdowns and dominated on defense. Paye culminated an incredible high school career in the process. The Michigan commit will be headed to Ann Arbor, Michigan next season where he don maize and blue and play for head coach Jim Harbaugh and defensive coordinator, Don Brown.

Two other members of the senior class, running back Matt DiTondo and quarterback Chris Hindle, accounted for the other scores with DiTondo racing home on two long touchdown runs and Hindle scampering 28 yards for a TD on a quarterback keeper.

In addition, Hendricken recorded a 10-0 record against Interscholastic League competition this season. It was the second consecutive year the seven-time state champion Hawks posted an undefeated record. The Hawks have won an incredible 26 games in a row. They have not lost since November 7, 2014 in a regular season matchup at La Salle.

Congratulations to head coach Keith Croft and the team on a remarkable run!

To read more of the sports coverage about the championship game from the Providence Journal, “Hawks roll to seventh straight state title,” please click here.

To view a photo gallery from the game, please click here.